The event organised by Industria Felix was held in Rome at the Luiss Guido Carli University, where the 160 best performing and most reliable Italian corporations of 2021 were awarded.

The 37th event of Industria Felix “Italy that competes” took place in the capital, an occasion in which 160 Italian companies, selected on the basis of reports and balance sheets by the Scientific Committee, in collaboration with Cerved, will receive the Felix Seal, a sign that demonstrates their growth and reliability acquired in recent years. 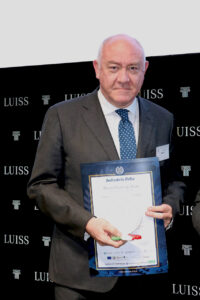 A prize that allows companies to gain visibility, increase financial reliability, enhance the value of their company and increase indexing on search engines.

What made this year’s edition special was the almost total attendance of the winning companies: 90% were able to collect their awards and attend the ceremony, marking an almost historic achievement given the Covid situation.

A total of 850,000 financial statements were analysed, but only the best companies were chosen because they proved to be management-performing, financially reliable and sustainable, a theme that is now at the heart of every company.

The event was held in two sessions, morning and afternoon: the morning featured speeches by important figures such as Confindustria vice-president Vito Grassi and leading members of the Cerved group, while the afternoon saw the awards ceremony for all the sectors involved.

Bracchi received an award for its activities in the Logistics and Transport sector. Our CEO and General Manager, Umberto Ferretti, was asked to speak at the event.

WAREHOUSES AND TECHNOLOGY, BRACCHI GROWS IN THE AGRICULTURAL AND INDUSTRIAL SECTORS

LOGISTICS 4.0: NEW SORTER FOR OUR HEADQUARTER